The imam at Istanbul's iconic Hagia Sophia mosque announced on April 8 he is stepping down from his duties to return to academic studies.

Mehmet Boynukalın, whose assignment at the nearly 1,500-year-old Hagia Sophia was temporary, asked to leave the post, and his request was accepted.

Gezi Park is one of over 1,000 properties that the Directorate General of Foundations has taken over within the last few years, but undoubtedly the most symbolic one for Erdogan alongside Istanbul's landmark Hagia Sophia.

Turkey's Little Hagia Sophia, a church which was converted into a mosque, received thousands of tourists every year prior to the pandemic.

The architectural marvel situated in the Güzelyurt district of central Aksaray province was built by Roman Emperor Theodosius I for Saint Gregorius Theologos in 385 CE. 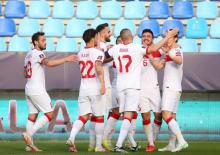 Turkey's World Cup qualifiers match against Latvia in Istanbul will be played with 15% fans in the stadium, the Turkish Football Federation announced March 28.

All health protocols determined by UEFA and Turkish authorities will be followed with fans requiring the country's coronavirus contact tracing HES code to enter the stadium, it added. 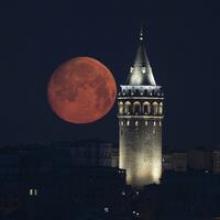 A full moon was observed over the Galata Tower in Istanbul on March 27. (AA Photo)

A full moon was observed over the Galata Tower in Istanbul on March 27. (AA Photo)

Following a week of spring rainfall and occasional strong winds, Turkey's metropolises have witnessed an unexpected snowfall, as this time around, March, contradicting the old weather lore, came like a lamb and will go out like a lion.

Nearly 24,737 newly built houses were sold while the rest were second-hand sales last month, TÜİK said in a statement.

A steep rise in the number of COVID-19 cases in most of Turkey's 81 provinces and scenes of crowded streets and restaurants over the weekend have prompted experts to issue warnings as the country moved to a controlled normalization phase.

The world-famous director is in Turkey for the shooting of his movie Five Eyes.