The two suspects arrested for during the widespread riots around the area of Exarchia near the Athens Polytechnic during celebrations of November 17 were charged with the felony of possession of explosives by the 9th district prosecutor on Tuesday. The two suspects, a German and a Greek national were released after they presented their defence to both the prosecutor and investigator.

Self-styled anarchists and members of anti-establishment groups appeared intent on Wednesday on creating mayhem with attacks against riot police during the commemorative events to mark the 44th anniversary since the student uprising at the Athens Polytechnic - now known as the National Technical University of Athens (NTUA). 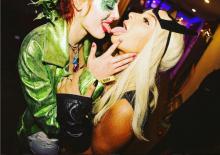 Actress Bella Thorne and her good friend YouTube star Tana Mongeau are having the time of their life on Halloween.

Death Disco opens its doors for "The Most Embarrassing 80s Halloween Party Ever" on Saturday, October 28. The organizers invite partygoers to take their inspiration from the likes of "Nightmare on Elm Street," "Edward Scissorhands" and "The Corpse Bride," while the music will be strictly cheesy 80s Europop. Admission costs 5 euros and includes a complimentary beer or glass of wine.

Around 10 hooded assailants launched an attack with Molotov cocktails against a police department in Pefki, northern Athens early Thursday morning.

According to police, the perpetrators threw five firebombs at the department located on Konitsis Street and that three cars, including two police vehicles, parked outside, caught fire.

Guided by the method of the expressionism, the academic artist Trajce Catmov at the exhibition "Creativity and Misery", presents before the audience canvasses on which he painted the experiences of the essence of the human emotional aspect.

He completely abstracts himself from the visual realm of the reality, and abandons every usual thing which the normal eye tends not to notice.

The incident occurred shortly after 3 a.m. outside the offices of PASOK on Harilaou Trikoupi Street.

No one was injured in the attack.

One person was briefly detained, questioned and released.

Hooded youths lobbed Molotov cocktails and stones at riot police units in Exarchia on Monday night, the latest episode in a spate of unrest in the central Athens district often dubbed an anarchist stronghold.

Around 20 hooded youths attacked a squad of riot police who were stationed at Tositsa and Patission streets, near the National Technical University of Athens in Exarchia late Friday night.

Self-styled anarchists clashed with police in the broader district of Exarchia on Wednesday, for the third night in a row, in the wake of a court ruling rejecting an appeal for release by a jailed terrorism convict.

Wednesday's upheaval occurred shortly before 10 p.m. when a group of hooded youths hurled Molotov cocktails at a police unit in the area.