EU funds fraud in Bulgaria is comparable to the largest markets for organised crime such as human trafficking, drug trafficking and illegal fuel trade, according to the "Bulgarian Organised Crime Threat Assessment 2020",  published by NGO Center for the Study of Democracy.

In the coming hours, access to the electronic system "Census 2021" and all systems and websites of the National Statistical Institute (NSI) will be difficult or impossible. This is due to a series of "Denial of Service" attacks with malicious attack traffic of over 250 gigabits per second, announced the NSI.

The topic was commented by the cybersecurity expert Spas Ivanov

Islamic State has claimed responsibility for the attacks, which killed 130 people

The biggest trial in France's modern legal history begins on Sept. 8 over the November 2015 attacks on Paris that saw 130 people killed at bars, restaurants and the Bataclan concert hall.

The suicide bombing and gun assault by three teams of jihadists, planned from Syria and later claimed by the Islamic State group, was France's worst post-war atrocity. 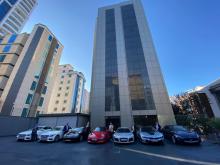 The members of a Turkish Ponzi scheme, which is believed to have collected 639 million Turkish Liras ($76 million) from some 13,000 people, have confessed to carrying millions in cash with parcels, daily Hürriyet has reported.

An Austrian court has ruled to extradite a Turkish businessman to Turkey where he is being investigated for money laundering charges, his lawyer Murat Volkan Dülger said on Aug. 30.

The internet can be dangerous to those who don't know how to protect themselves, which is exactly what this article aims to teach you how to do.

The U.S. Pentagon press secretary on Aug. 26 said there had been an explosion outside Kabul airport, adding it was unclear if there were casualties.

Germany's highest court has rejected the appeals of three people who were convicted in one of the country's most high-profile murder trials involving a far-right group.

The decision announced Thursday by the Federal Court of Justice confirms the life sentence given three years ago to Beate Zschaepe, the only known survivor of the National Socialist Underground.