Sezgin Baran Korkmaz, a Turkish businessman, who has been sought for money laundering, was arrested in Austria on June 19 at the request of the United States.

An Istanbul court has sentenced a policeman to 16 years and eight months in jail in a case into the death of Berkin Elvan during the Gezi protests in 2013.

The National Student Council considers that the solution to school violence is not the creation of anti-bullying working groups, as the Education Ministry plans, but the training of teachers and school counsellors in this regard. "The National Student Council deeply disapproves of the Education Ministry's attitude about this increasingly serious problem.

Istanbul police have detained 32 people for allegedly smuggling migrants and laundering the money they made from them.

Units from the anti-migrant smuggling and border crossing department had been observing the operations of certain companies operating as tourism and travel agencies.

There is a new surge in phishing attacks with fake e-mails about outstanding liabilities to the National Revenue Agency (NRA). Fake messages are sent on behalf of private enforcement agents, the NRA has warned. In recent days, thousands of Bulgarians have received intimidating letters on their e-mails.

So if this is the moment when we can turn away from criminals and the damage they have left behind them, and toward the societies picking up the pieces, what are the lessons that can be learned from 28 years of keeping law on the front burner? Let me suggest a few, in the hope that other people can suggest some more.

Lesson 1: The search for truth is more than confirmation of facts

The man was most likely a victim of a gang feud 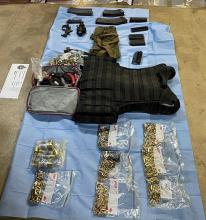 The gang was led by a notorious Albanian criminal