DJIBOUTI, BELGRADE - The Serbian Armed Forces first autonomous team for protecting ships from pirates, which participated in Operation Atalanta of the EU Naval Force (NAVFOR), completed its tour of duty with NAVFOR on Tuesday.

A ceremony was held at the French base in Djibouti to mark the end of team's tour and they were presented with medals for their work with NAVFOR.

THE HAGUE - The hearing continues on Tuesday before the International Court of Justice (ICJ) in the dispute between Serbia and Croatia on mutual suits for genocide committed in the territory of Croatia in the period from 1991 to 1995 by further presentation of arguments by the Croatian legal team, followed by cross-examination of witnesses proposed by Croatia.

THE HAGUE - Croatian Justice Minister Orsat Miljenic said Monday that Croatia wants to show at the International Court of Justice (ICJ) the truth about what really happened during the conflicts on the territory of that country in the 1990s.

THE HAGUE - Head of the Croatian legal team Vesna Crnic-Grotic said on Monday that Croatia will present its evidence during the hearing before the International Court of Justice (ICJ) in The Hague, which will include some new materials to support the claim that Serbia committed genocide in its territory in the period from 1991 to 1995.

BELGRADE – The International Court of Justice (ICJ) in The Hague met to hear oral arguments in a dispute between Croatia and Serbia on mutual genocide suits at 10 a.m. Monday.

The Supreme Court has asked Parliament to lift the immunity of Golden Dawn MP Stathis Boukouras, who is already facing charges of being part of a criminal organization, so he can be tried for traffic offenses.

The Bosnian state court said that the increasing number of war crimes prosecutors being employed to tackle a huge case backlog meant that it could need more courtrooms to try suspects.


BELGRADE -- Aleksandar Vučić says the court in The Hague will decide about issues from the past, while the political elites in Serbia and Croatia will focus on the future.

BELGRADE - A police official from the section for special investigative methods of the Inteior Ministry department of criminal police has been interviewed at the Office of the Prosecutor for Organized Crime as part of a preliminary investigation related to the Lazarevic case, Organized Crime Prosecutor Miljko Radisavljevic has told Tanjug. 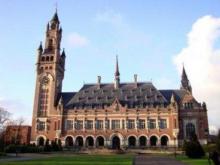 
BELGRADE -- The International Court of Justice (ICJ) will launch a debate in the dispute between Serbia and Croatia on mutual genocide suits on March 3.