Ronaldo also became the top scorer in the Euro history

Cristiano Ronaldo was crowned 'Player of the Century 2001-2020' at the Globe Soccer Awards in Dubai, but the evergreen Portugal striker handed his award for World's Best Player to Bayern Munich hitman Robert Lewandowksi.

Juventus' star Cr. Ronaldo went in Dubai during the break in the Italian Serie A.

The debate over who is the best of the two stars is long-standing. Messi is still in Barcelona; But Cristiano Ronaldo has left Real Madrid for Juventus. That is why the duality of these two has not been seen for more than two and a half years. Now it is the Champions League match. 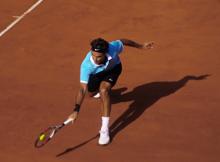 Tennis star Roger Federer is the highest-paid athlete in the world, according to Forbes.

Villager Ümmiye Koçak, who founded the Arslanköy Women's Theater Group in the southern province of Mersin and appeared in an ad with the Real Madrid and Portugal star Cristiano Ronaldo, now is seeking to draw attention to climate change with a new play she is working on with an eight-person team.

A confirming notification was handed over by a court in Las Vegas, Nevada last month. It is unclear whether the Portuguese professional footballer has reached an out-of-court settlement with the accuser Kathryn Mayorga, writes bloomberg.com.

Luka Modric has been crowned as this year's Ballon d'Or winner, France Football confirmed at the award ceremony in Paris on Monday night, reports Evening Standard.

Every football enthusiasts have an opinion about the world's best football stars, but almost everyone agrees on the greatness of just a few players. The debate varies between every football aficionado over who is presently the best footballer on the planet. Many of these players play for the elite football teams such as Barcelona, Real Madrid and Manchester City. What's exceptional?