Turkey has proposed the establishment of a special working group at the G20 to address the Afghanistan-related issues and warned the international community that Afghan people cannot be left to their fate.

At least 12 people were killed and 32 injured in an explosion near the Id Gah mosque in Kabul, where a farewell ceremony is taking place for the mother of Zabihullah Mujahid, a representative of the radical Taliban that seized power in the country, Al-Jazeera TV reported on Sunday, citing a source in the Afghani security service. 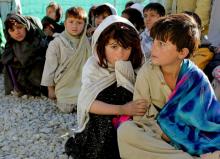 The Taliban killed a child. The reason - suspicion that his father was involved in the resistance against the new regime.

The news was spread by Afghan media, which published a video with the bloody body of the little boy. According to Panjshir Observer, the murder took place in Takhar province.

The Turkish ambassador to Qatar met on on Sept. 23 the acting deputy foreign minister of Taliban administration in Afghanistan, the Turkish Embassy in Doha said.

A month after seizing Kabul, the Taliban face daunting problems as they seek to convert their lightning military victory into a durable peacetime government.

It is a moral duty to deliver humanitarian aid to the Afghan people, Turkey's foreign minister said on Sept. 13.

Addressing a high-level U.N. ministerial meeting on the humanitarian situation in Afghanistan, convened by Secretary-General Antonio Guterres, Mevlüt Çavuşoğlu argued that "a humanitarian and security crisis in Afghanistan would have direct implications across the globe."

Afghan journalists sheltering in Albania are grateful to have escaped the Taliban take-over but fear for the possible persecution of their families back home.

As "Russia Today" reports, "Lion's Valley" was the last stronghold of the forces that oppose the Taliban rule.
As a reminder, the media previously reported that Fahim Dashti, a spokesman for the National Resistance Front (NRF) of the Afghan northern province of Panjshir, which refused to recognize the Taliban government, was killed in armed conflicts, Kama Press reported.

Some 50 Afghan women, leaving their hair half-covered with a headscarf and wearing purple scarfs around their necks, marched to the Presidential Palace in Kabul on Sept. 4, chanting slogans against the Taliban, saying, "We are not afraid."