Referring to the death of an unarmed man, George Floyd, while in police custody in the US city of Minneapolis, the Archbishop of America Epidophoros described the incident as an "unjust slaying" that "cannot be where America stands."

An already worrying situation with domestic and gender-based violence in Bulgaria has worsened during the state of emergency, according to an NGO working in the field, the Sofia-based Bulgarian Fund for Women.

Eight women have lost their lives after being killed by their partner since the state of emergency was imposed on March 13, the fund said.

Amid a spike in incidents of domestic violence during the lockdown, a video made by the Hellenic Police (ELAS) offers advice to victims.

"I assess today's physical attack of Bosko Obradovic and the actions of the supporters of the Alliance for Serbia on MPs and other people who tried to enter the National Assembly as pure fascism," Minister Nebojsa Stefanovic stated.

On the bench opposite them would be the perpetrator who had committed the actual crime, and he would tell the story of how he and a certain colleague had stopped two boys on the side of the street, checked them, drove them somewhere in the dark and finished them off. He would reveal to the mother in detail how her son was actually murdered and where they buried his body.

An adviser to Citizens' Protection Minister Michalis Chrysochoidis has said it is too early to say whether a public lockdown has resulted in an increase in domestic violence but warned that the conditions could increase pressures and lead to a spike. 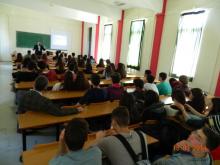 52% of Bulgarian teenagers aged 14-19 have been exposed to extreme content online, according to a nationally representative survey, part of a national "Find another way" campaign aimed at promoting critical thinking and civic engagement among young people. About 30% of them came across such content by accident, the survey shows.

Belgrade media reported earlier that he was threatening to kill himself.
Numerous police teams, ambulance, firefighters as well as a special police negotiation team were dispatched to the scene immediately.

The Istanbul Arbitration Center (İSTAC) has published rules governing "mediation-arbitration" (Med-Arb), an alternative dispute resolution procedure which has the characteristics of both mediation and arbitration.