I have to admit that it sounded kind of crazy when I first heard the news that George Gigicos, one of US President Donald Trump's key campaign staffers in the runup to the 2016 elections, was in Greece helping New Democracy candidate Sofia Nikolaou in her campaign for a seat in Parliament in general elections later this year.

The top U.S. defense official has presented an updated military plan to President Donald Trump's administration that envisions sending up to 120,000 troops to the Middle East should Iran attack American forces or accelerate work on nuclear weapons, the New York Times has reported.

U.S. President Donald Trump on May 12 defended his tariff policy, insisting again that China will pay billions in duties to the U.S. after Trump's economic advisor raised eyebrows by saying both sides will suffer.

Top congressional Democrats left the door open on April 21 to the impeachment of U.S. President Donald Trump, but said they would first need to complete their own investigations into whether he obstructed justice in Special Counsel Robert Mueller's Russia probe. 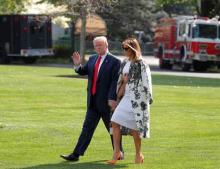 Fearing that his presidency was doomed, an angry Donald Trump pushed for Robert Mueller to be fired before he could deepen his probe into Russian election meddling, the special counsel's long-awaited report said on April 18. 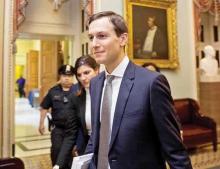 A high-stakes bargaining game is currently in progress over the fate of the US-made F-35 fighter jets and Russian-made S-400 missile systems ordered by Turkey. We are keenly anticipating how this will all end. We are living in different times to the days when decisions in the United States were taken by bureaucrats and competent state officials.

The top Democrat in the U.S. Congress ordered a safety review for a Muslim lawmaker and her family on April 14 after accusing President Donald Trump of putting her in danger by tweeting a video of her spliced with footage of the 9/11 attacks.

US Vice President Mike Pence warned Turkey on Wednesday against buying a Russian S-400 anti-missile system, keeping up the pressure on its NATO ally to abandon the purchase that Washington considers a threat to US military equipment.

Among the world's most influential people in 2018, positioned among heads of state and billionaire entrepreneurs, is an introverted 29-year-old with bright pink hair.