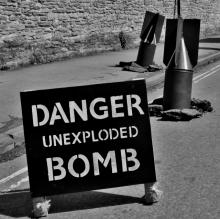 More than 13,000 people were evacuated from the city of Dortmund, North Rhine-Westphalia in Germany, MIA reports. Evacuation is required because of old bombs found near residential buildings.

The bombs are believed to be from World War II and were dropped by Allied forces during the war. Citizens were ordered to leave their homes early this morning.

The King of Serbian Music Saban Saulic was killed in a severe car crash in Germany.

The incident occurred in Bielefeld, not far from Dortmund.

67-year-old Shaulich traveled with a relative. The two were immediately taken to hospital, but Saulic died there.

The musician was on the stage from the 70s. Before he began to play music, Saulic trained football.

A 28-year-old man accused of detonating bombs targeting a top German football team has confessed to the deed. But he denied having any intention to kill, Deutsche Welle reported.

Barcelona's official site announced a deal with Borussia (Dortmund) for one of its major transfer goals - Ousman Dembele. Neymar's replacement will cost the Catalans EUR 105 million, including bonuses that depend on the player's performance. Yesterday, the Spanish media reported that Dembele would cost Barca 150 million euros with all the additional tranches included.

The traces of the suspects of the separate bomb attacks in Russia's St. Petersburg and Germany's Dortmund have been found in Turkey.

As many as three explosions damaged the bus of one of Germany’s most storied soccer teams as it headed to its stadium in Dortmund on Tuesday, wounding one player and forcing postponement of the match, an important playoff in a major European championship.

According to media reports three explosions have occurred near the Borussia Dortmund team bus while the side were heading to their Champions League game against Monaco in Germany this morning. So far the cause of the explosions has not been determined.

Hungary's low cost carrier Wizz Air will on August 20 launch its third route from the airport Konstantin Veliki in Nis, a city in southern Serbia.

The company will fly from this town to Dortmund, Germany, on Tuesdays, Thursdays, and Saturdays.

Arkansas Derby winner American Pharoah was installed as the early favorite for May 2 141st Kentucky Derby after drawing the 18th post position for the first leg of the Triple Crown.

American Pharoah was listed at 5-2 in the morning odds, with stablemate Dortmund rated the 3-1 second pick for his trip from the eighth position in the 20-horse field.