How much do Bulgarians know about alcohol?

Here are six curious facts about the nation's alcohol culture.

A prosecutor demanded up to 25 years in jail for a man who sold methyl alcohol that led to the death of a 36-year-old lawyer in Istanbul's Kartal district last year.

The death toll from bootleg alcohol has risen to 12 in the northwestern province of Tekirdağ's Çorlu district, while seven people are still being treated in intensive care unit for alcohol poisoning.

Two more men, named Vedat Bektaş and Ahmet Ataman, died on July 5 of alcohol poisoning in Çorlu, an industrial town that has been hit by a string of deaths linked to bootleg liquor.

Dragoljub Jovanovi, a pedagogue from the Special Hospital for Addiction Diseases in Drajzerova Street, told RTS that the consequences of drinking alcohol can be catastrophic for a young organism.
Dragoljub Jovanovi says that there are three factors in the development of alcoholism - the substance itself, a person with its individual characteristics and the environment. 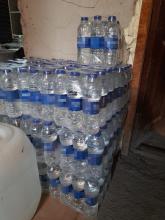 The death toll from bootleg alcohol has risen to at least six in the Çorlu district of the northwestern province of Tekirdağ while more people are going to hospitals for alcohol poisoning.

Women of childbearing age should be banned from drinking alcohol, says the World Health Organisation.

Its latest Global Alcohol Action Plan calls on countries to raise awareness of alcohol-related harm and its harmful use.

There's something missing from a new wave of bars opening around the world: Alcohol.

The 2020 edition of the Global Drug Survey has found that residents in English-speaking countries and Northern Europe drink to intoxication more often than in any other region of the world.

Giving up alcohol for January can have both a positive and negative effect on your body, an expert has shared.

While there are obvious benefits associated with avoiding alcohol, such as a reduced risk of developing cancer and liver disease later in life, Dry January can also have a surprising detrimental impact on your body.

Greek adolescents rate their health significantly better than their counterparts in other countries although their habits do not justify this confidence, according to a study by the World Health Organization made public this week which also showed that most Greek youngsters feel supported by their families.