Most of the coffee vending machines and restaurants in the coastal city of Bourgas already offer biodegradable utensils and food packaging. The reason is a new European directive that bans 8 types of plastic products throughout the European Union, including in Bulgaria this summer.

The procurement of single-use plastics will end in the public sector as of February 1, 2021, Natural Environment and Waters Secretary General Constantine Aravossis said on Wednesday, in a memo to all state agencies.

The regulation voted by Parliament in October calls for an end to the procurement of 10 specific types of single-use plastics, in line with EU directives.

The leading hotel group Accor announced its commitment to join the UN Global Tourism Plastics Initiative and to remove all single-use plastic items in guest experience from its hotels by the end of 2022. This decision will affect the local hotels managed by Accor - Novotel Sofia and ibis Sofia.

Greece has announced a campaign against plastic pollution and promised to end the use of single-use plastics by June 2020, AFP reported.

"39 tonnes of plastic waste end up in the sea in Greece (every day) and a lot of it turns into fish food," Environment Minister Kostis Hatzidakis said at a press conference.

"The fight against plastic pollution is a government priority." 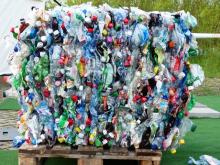 A collaboration between the Municipality of Serifos and the A.C. Laskaridis Charitable Foundation aims to make the island's Vagia beach the first smoke-free one in the country.
The project envisages the creation of a designated area for smokers, with ashtrays bearing environmental messages aimed at sensitizing visitors to the polluting impact of cigarette stubs.

The European Parliament has voted to ban a range of single-use plastics such as straws, cotton buds and cutlery and to ensure most bottles are recycled in a bid to curb ocean pollution.

Minoan Lines said on Wednesday it is the first ferry company in Greece to stop using plastic straws on its vessels, replacing them with straws made from biodegradable environmentally friendly material.

An Indian man obsessed with setting Guinness world records had all his teeth removed so he could put about 500 drinking straws and more than 50 burning candles in his mouth.

Har Parkash Rishi, who claims to have set more than 20 records, now calls himself Guinness Rishi.