Greek hip-hop veteran Ilias Papanikolos, aka Eisvoleas, returns to the Gagarin 205 to present his latest album, "Liakos vs Eisvoleas," and a selection of his earlier works. Eisvoleas will be accompanied by a band in this concert that will also feature a number of surprise guests.

High rates of compliance with the anti-smoking law continue to be recorded in restaurants and bars, according to the National Transparency Authority (EAD) and the Greek Police (ELAS).

More specifically, in the period between January 6 and 16, 86 percent of the 352 restaurants and bars that were inspected were found to be in compliance with the law.

A rebetiko trio comprising Vassilis Skoutas, Dimitris Mitarakis and Yannis Zaria, singer Maria Koti and musicians Kostas Gerakis and Dimitris Emmanouil will be joining forces for two nights at The Zoo in the northern Athens suburb of Halandri on January 18 and 19.

The National Transparency Authority shot down attempts to open "smokers clubs" across Greece, saying the law is clear about the universal ban of smoking and warning of repercussions if they flout it. 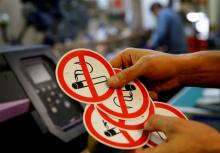 It was long in coming but widespread enforcement of the anti-smoking law now appears to be a reality in Greece.

The data collected jointly by the National Transparency Authority and Greek Police from inspections indicates that the overwhelming majority of citizens and businesses are complying with the law.

Turkish police on Dec. 24 seized kilograms (nearly 500 pounds) of marijuana from a truck in the country's southeast, according to a security source.

The drugs were seized in Gaziantep after anti-drug teams stopped the vehicle and arrested the driver in a sniffer dog-aided operation, said the source, who asked not to be named due to restrictions on speaking to the media.

The World Health Organization (WHO) has noted  turn to the fight against smoking - the number of male smokers is decreasing for the first time worldwide and is on the turn, BTA reports.

So far, the WHO has noted a regular increase in male smokers since recording their numbers over the past 20 years.

Prime Minister Kyriakos Mitsotakis officially launched the Health Ministry's national action plan against smoking on Tuesday, hailing it as a "bold initiative for protecting public health" that would "modernize and refine public life."

The government is currently drafting a joint ministerial decision ensuring stricter fines for violations of the anti-smoking law which will officially go into effect on November 19.
The fines currently in place were introduced a decade ago when the first anti-smoking legislation was passed into law and are not considered tough enough by authorities.