The World Health Organization has alerted six countries to watch out for potential Ebola cases after fresh outbreaks in Guinea and Democratic Republic of Congo, a spokeswoman said on Tuesday.

Preliminary testing shows that 29 out of 30 virus patients in serious condition that were administered the drug, made a full recovery in five days 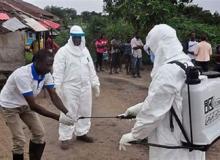 Experts are urging citizens to try harder to observe health protocols aimed at curbing the spread of the coronavirus following a spike in infections and as Greece prepares to open its borders to tourists.

One person died today, while 249 people have died since the beginning of the corona virus epidemic in Serbia.
There are currently 15 people on respirators.
11.348 patients recovered, while death rate stands at 2.11 percent.
The total number of infected is 11.803 out of 272.502 people tested since the outbreak of the epidemic.