Serbia "step away" from using EU funds for agriculture

BRUSSELS -- Serbia is a step away from the possibility of using the EU agriculture and rural development funds which in the first phase amount to EUR 11mn annually.

This is according to Serbia's chief negotiator with the EU Tanja Miščević, who spoke on Monday.

Albania’s Inspectorate for the Audit of Assets and Conflict of Interests, ILDKPKI, has a filed a criminal complaint at the general prosecutor’s office against the country’s ambassador to Slovakia, Agim Isaku, and judges Ken Dhima and Klorinda Cela.

Growth in euro-area manufacturing and services stayed close to the fastest since 2011 in March as France improved, providing further evidence that the regions recovery is on track.

Since joining the EU in 2007, Bucharest has received around 21.3 billion euro from European funds compared to its contribution of some 10.6 billion euro, the Romanian Central Bank has said.

BELGRADE - The Serbian government's team for social inclusion and poverty reduction, Ministry of Labor, Employment and Social Policy and the Office for Cooperation with the Civil Society called on all interested organizations to submit comments on the draft of the first part of the Employment and Social Reform Program (ESRP) until March 26. 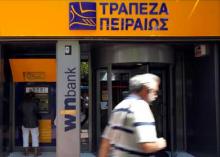 Piraeus Bank's comeback to the public bond market  the first from a Greek bank in over four years  has fueled hopes that its lenders are on the road to recovery, but capital demands are looming as the next big challenge.

Cyprus Finance Minister Harris Georgiades told the countrys national broadcaster on Monday that he expects all domestic capital controls to be lifted by the end of spring.

Members of Parliament who may be considering voting against the proposed bill outlining the likely deal between the coalition government and the countrys partners and creditors  the European Union, the European Central Bank and the International Monetary Fund  ought to properly consider the effects that their decision could have.

European Central Bank funding to Greek banks dropped by 2.5 billion euros to 60.72 billion euros at end-January from the previous month, the Bank of Greece said on Friday.

Emergency liquidity assistance (ELA) from the Greek central bank, by contrast, rose in the same period, to 10.12 billion euros from 9.79 billion, the figures showed.