Albania severed diplomatic relations with Iran on Wednesday and kicked out its diplomats after a cyberattack in July it blamed on the Islamic Republic of Iran.

Serbia, Albania and North Macedonia have decided to help each other with energy and food shortages in winter and to ask for help from the EU. This happened at a meeting of the "Open Balkans" regional initiative on Friday in Belgrade.

A pro-opposition media group in Albania on Friday accused the Socialist government of Prime Minister Edi Rama of harassing its owner businesses to force it to change its editorial line - an accusation the government has rejected.

"The preparation of our country in the Organization for Economic Cooperation and Development (OECD) is moving forward, and on August 25, the Ministry of Foreign Affairs held a meeting of the interdepartmental coordination mechanism for Bulgaria's accession to the OECD.

Experts have expressed dismay after Albanian Prime Minister Edi Rama on Wednesday raised the possibility of again allowing online gambling, saying the move would be harmful and regressive.

Aacknowledging his government's failure to crack down on the industry, Rama said gambling activity had continued despite the ban his party imposed a few years back. 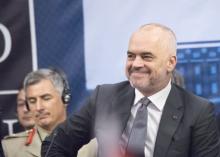 The Ministry of Foreign Affairs issued a reaction against Albanian Prime Minister Edi Rama's statements that Bulgaria blocked the start of the country's EU membership negotiations for 8 years.

The summit will be held on Friday, September 2 in the Palace of Serbia, and it will be chaired by Aleksandar Vui, it was stated in the press release of the Office for Media Relations of the President of the Republic.

Both understand that bad moves at the local level are more tolerable to the West than those at the regional level, as long as you play nice with the neighbours; both rule their countries with an iron fist - Vucic overtly, Rama's hidden behind a velvet glove.

The Albania government said on Monday that it is seriously examining an incident at the weekend in which two Russians and a Ukrainian passport holder were detained while entering an arms factory in Gramsh and allegedly assaulted soldiers. 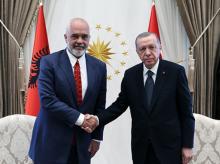