The election results so far show that the left-wing coalition led by Jean-Luc Mlenchon has a slight advantage in the number of votes won in the first round of parliamentary elections.

French President Emmanuel Macron's centrist alliance was in danger of falling short of a majority after the first round of parliamentary elections on Sunday saw a surge in support for a new left-wing coalition.

"We have clear sanctions for Russian flights. We will not be the ones to illegally let some foreign minister just because he thinks he is right. There is a law, there are rules and our country will follow them. 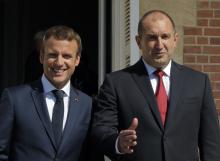 French President Emmanuel Macron has expressed readiness to bring together in Paris, "when the time comes", representatives of the authorities in Sofia and Skopje to conclude a bilateral agreement that would allow negotiations to begin on the accession of the Republic of North Macedonia (RNM) to the European Union, AFP reported, quoted by BTA.

That agreement would enable the opening of negotiations for Skopje's accession to the European Union.
However, as he said, that will happen "when the time comes".

They called on him for serious direct negotiations with the President of Ukraine, Volodymyr Zelensky, as well as for a diplomatic solution to the conflict.
Putin told the two leaders that the delivery of weapons to Ukraine was dangerous, warning of "the risks of further destabilization of the situation and worsening of the humanitarian crisis," the Kremlin said.

Turkish President Recep Tayyip Erdoğan on May 5 congratulated his French counterpart Emmanuel Macron on his re-election, and emphasized the importance of ties between Ankara and Paris for Europe.

The phone call marked the first interaction between the two leaders since Macron was re-elected on April 24, fending off a serious challenge from his rival Marine Le Pen.

French President Emmanuel Macron faced the daunting challenge of uniting a deeply divided nation Monday after winning re-election in a battle against Marine Le Pen that saw the far right come its closest yet to taking power.

Centrist Macron won 58.54 percent of the vote in the second-round run-off compared with 41.46 for Le Pen, according to final results from the interior ministry.

When he appeared in the 2017 elections, he destroyed the French party system. Still, he will run for a second term as a rather unpopular president.