According to the first estimates from the exit polls, Emmanuel Macron wins 23.7% to Marine Lepen’s 21.7%. It is the first time in history that the establishment parties have been left out of the second round.

Pro-European centrist Emmanuel Macron and anti-immigration leader Marine Le Pen began a final duel for the French Presidency on April 24, after a first round of voting delivered a stunning blow to the traditional political class.

France voted on April 23 under heavy security in the first round of the most unpredictable presidential election in decades, with the outcome seen as vital for the future of the beleaguered European Union.

Far-right leader Marine Le Pen and centrist Emmanuel Macron were the favorites to progress to a run-off on May 7.

France began voting on April 23 under heavy security in the first round of the most unpredictable presidential election in decades, with the outcome seen as vital for the future of the beleaguered European Union. 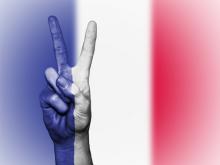 The first round of the 2017 French presidential election is to be held on 23 April. 47 million people are going to choose the future not only of France, but also of Europe, reported BNT.

Here's how the French presidential election is going to work. This Sunday's vote will pick the leading two candidates, who will then have another two weeks to campaign for the run-off vote. But the leading four candidates are now bunched together so closely in the polls that any two of them could make it through to the second round. Including a couple of quite worrisome people.

More than half of police officers in France have said they are voting for far-right candidate Marine Le Pen in Sunday’s election because of her strong anti-terror stance.

According to the IFOP poll, 51 per cent of the Gendarmerie are planning to back Le Pen in the nail-biting election.

The wheel is turning and no one knows where the ball will stop, who will be the next president of France. This is the most important, and at the same time the most unpredictable, of elections. Not only for France but for Europe. 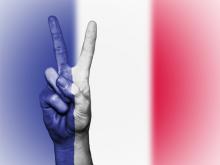 Centrist Emmanuel Macron clung on to his status as favorite to win France's presidential election in a four-way race that is too close to call, as the camp of far-right challenger Marine Le Pen ramped up its eurosceptic rhetoric in a row with Brussels, Reuters reported.

Five days before the first round of France’s presidential election, two men have been arrested on suspicion of planning an imminent attack.

The suspects, aged 23 and 29, were detained in Marseille by elite police and domestic intelligence agents after a search that had lasted several days.

Both men are French citizens said to have been radicalised in prison.