EU would not be able to survive the effects of Marine Le Pen's victory in the presidential elections in France, French PM Bernard Cazeneuve has warned.

The EU must reform or it could face "Frexit," French presidential candidate Emmanuel Macron has said.

The pro-European candidate, who is expected to "defend European values," spoke for BBC at the start of the last week of campaigning ahead of the runoff against extreme right candidate Marine le Pen.

A week before the decisive second round in France's presidential election, many voters are skeptical that either of the two candidates can solve chronic unemployment or tackle security concerns, a poll published on Sunday found, reported Reuters. 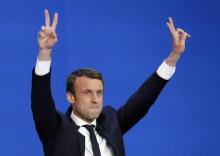 The EU must reform or it could face "Frexit," French presidential candidate Emmanuel Macron has said.

The pro-European candidate, who is expected to "defend European values," spoke for BBC at the start of the last week of campaigning ahead of the runoff against extreme right candidate Marine le Pen.

In his victory speech on April 23 night Emmanuel Macron, the next president of France, said: "I want to become...the president of the patriots in the face of the threat from the nationalists." The distinction would be lost on most Donald Trump supporters in the United States and on the "Little Englanders" who voted for Brexit in Britain, but it's absolutely clear to the French, and indeed to mo

One of the key objectives for Greek tourism this season is the coverage of losses suffered last year in terms of arrivals and takings from French tourists, and there are already two positive signs in that direction.

Emmanuel Macron told striking factory workers that he can do nothing to save their jobs from cheap foreign labour when he paid them a last-minute visit on Wednesday.

Macron, who is pro-globalisation, had not been scheduled to speak with Whirlpool staff in his hometown of Amiens, but was forced to make a detour after Marine Le Pen went to see them earlier in the day.

Yet another new political force has emerged in France, Emmanuel Macron, sending a frisson of relief through the European establishment after he managed to snatch the first round of the French presidential election from Front National leader Marine Le Pen.

Far right candidate Marine Le Pen announced Monday that she is temporarily standing down as the leader of National Front in order to beef up her national appeal against the independent, centrist candidate Emmanuel Macron.

Yet, while conventional wisdom is that Macron will now beat Le Pen, potentially by a huge landslide, the race could be tighter than some expect.

Macron, the centrist candidate who faces far-right leader Marine Le Pen in France's May 7 second round, said if elected he would ensure France protected "democrats in all countries."