Enlargement of the European Union

North Macedonia and Albania can deliver on the reforms required to join the European Union, the EU enlargement commissioner said on Tuesday, in the latest sign that the Balkan neighbors are set to overcome France's freeze on their aspirations.

Much Ado About Nothing

The EU's new enlargement methodology has been pitched as reinvigorating the accession process, breathing new life and dynamism into it. Yet in the Balkans, it has received a cool and muted response. Many local officials and observers are sceptical, seeing it as just a way to repackage the same old enlargement process in a slightly different way. 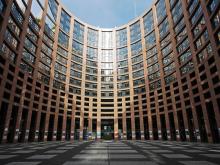 The European Parliament will give its opinion on the upcoming negotiations on future EU-UK relations. This is indicated by the program of the weekly MEPs session beginning today in Strasbourg.

"The proposed new wave of enlargement, which has been on the cards for years but has also stalled on several occasions, notably due to opposition from France, is evidently supposed to give a new impetus to the EU in the wake of Brexit.

Serbian President Aleksandar Vucic said that he likes the new EU enlargement methodology, presented on Wednesday in Brussels, but that Serbia will study it before deciding whether to accept it, or to continue its accession negotiations in line with the current framework.

Balkan EU hopefuls on Wednesday welcomed the unveiling of a new proposed methodology for European enlargement on Wednesday in Brussels by Olivér Várhelyi.

The Enlargement Commissioner said that the revised accession process needed to be more credible, with a stronger political steer, more dynamic and more predictable.

Turkish Foreign Minister Mevlüt Çavuşoğlu has written a letter to officials in Europe on the European Union's new enlargement policy.

Romania has signalled its growing frustration with the CVM - a system of checks on its adherence to the rule of law - by demanding that similar monitoring be extended to the rest of the European Union.

It is explained that Brexit, French President Emmanuel Macron, who said he was not in favor of enlargement, along with the Kosovo issue, had contributed to the decrease of the support for EU membership.