Two separate drug busts in the regions of Attica and Magnesia in central Greece resulted in the seizure of several kilograms of drugs and military-grade weapons, the Hellenic Police (ELAS) announced on Tuesday.

Turkish police on Dec. 24 seized kilograms (nearly 500 pounds) of marijuana from a truck in the country's southeast, according to a security source.

The drugs were seized in Gaziantep after anti-drug teams stopped the vehicle and arrested the driver in a sniffer dog-aided operation, said the source, who asked not to be named due to restrictions on speaking to the media.

For Greek consumers and also for other Europeans using cannabis not as a drug but as a component of food, pharmaceutical and cosmetic products is something new. This, after all, is the main reason the European market of 512 million people appears to have a particular potential for growth.

Ten people were arrested on drug possession charges during a raid on a nightclub in the Gazi district of Athens, police said on Monday.
The raid, which took place early on Sunday morning, led to the seizure of 12.6 grams of cannabis, 3.5 grams of cocaine, 1.7 grams of heroin, 3.2 grams of MDMA and at least 20 pills.

The most recent results of the Empty Pack Survey that measures the levels of illegal trade in our country were just presented. How will you comment on them?

More than 11 tonnes of cannabis were found and seized in a specialized action by criminologists from the Ministry of Interior - Blagoevgrad and the gendarmerie. This is reported by police.

Improvised knives and small quantities of drugs were seized by members of the Crime Prevention and Suppression Team (OPKE) in Avlona prison, north of the capital, late on Wednesday night.
The officers, backed by a riot police unit, entered the prison to carry out a surprise raid at 11 p.m. and searched all prisoners' cells. 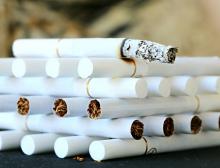 Yesterday, the Tobacco giant British American Tobacco announced that it will lay off 2,300 employees globally by January, Reuters reported.

Police officers in the narcotics squad in Ioaninna, northwestern Greece, seized more than 73 kilograms of cannabis in the early hours of Tuesday morning after detaining a 43-year-old suspected drug dealer near the village of Kefalovryso.
Officers found the drugs during a search of the man's vehicle, which they stopped after receiving a tip-off.