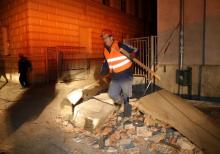 According to the latest information, seven people were killed, including two children. There are two Serbs among them, said the president of the Serbian National Council, Milorad Pupovac.

But in the end, the party had to for with less, as in exchange for its continued participation in the Social Democrats-led government, it accepted a freshly-tailored seat of First Deputy Prime Minister tasked with overseeing the political system and inter-ethnic relations.

Iraqi Prime Minister Mustafa Al-Kadhimi paid a one-day official visit to Ankara on Dec.17 to discuss with President Recep Tayyip Erdoğan economy and security matters, including combatting the PKK and ISIL, the re-construction of Iraq, trade and energy.

More than 264,000 Romanian citizens had voted abroad in the general election until Sunday as of 23:00 hrs, Romania's time, with 21,329 of these votes being cast by mail, the Permanent Electoral Authority announced on its website. In Spain, the country with one of the largest Romanian communities abroad, 140 polling stations were organized, in which more than 33,000 people cast their ballots.