Social Democratic Party (PSD) presidential candidate Victor Ponta on Saturday called all Romanians to join him in what will be the great union, stating there are 55 days until this becomes a reality.

Romanian language is one of the fundamental symbols of national unity, President Traian Basescu's message on the Romanian Language Day reads, as released on Sunday by the Presidential Administration.

The President underlined that Romanians' 'spiritual tradition proves, especially through the Romanian language, that we belong to a space of European civilization."

MOSCOW - Serbia will increase its cheese export to Russia in two weeks, Russian Minister of Agriculture Nikolay Fyodorov said after the meeting with his Serbian counterpart Snezana Bogosavljevic Boskovic in Moscow on Thursday.

Prime Minister Victor Ponta said in opening remarks to the Diaspora Estival (The Summer of the Diaspora) Programme in the Black Sea resort of Eforie Nord on Monday that the image of Romania in countries like Britain and Italy also depends on the Romanians who go there and on what they say about their country.

The Soviet Union dissolved in 1991, the year I started to work as a junior diplomatic reporter. Turkey recognized all the newly independent states. Delegations from Kazakhstan, Kyrgyzstan and Turkmenistan started to come to Turkey  I would cover their visits. In many instances, either a Kazakh or a Kyrgyz would look at me and say I am probably from their lands. 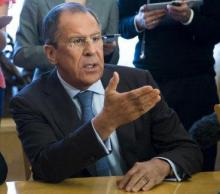 MOSCOW -- Ukrainian authorities' orders to troops to fight their own people are "impossible," Russian Foreign Minister Sergei Lavrov has told Itar-Tass on Monday.

His comments came as 438 Ukrainian military personnel reportedly fled across the border into Russia overnight.

Secretary of State with the Labour Ministry Codrin Scutaru on Friday said that the gestures by some xenophobe groups of vilifying the Romanian community in Spain must be firmly discouraged by the Romanian and Spanish authorities.