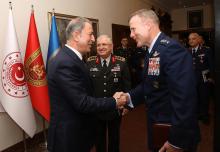 Turkey's Defense Ministry on Nov. 17 said that the YPG/PKK terror group released over 800 ISILprisoners of war in Tal Abyad, Syria.

Eight civilians were killed and at least 20 others wounded in a car explosion attack by YPG/PKK terrorists in south of Tal Abyad in northern Syria, Turkey's National Defense Ministry said on Nov. 10.

Turkey's military sources on Nov. 1 announced that Syrians who hear of the comprehensive security measures taken in Tal Abyad and Ras al-Ain are returning back to the area.

U.S. troops have begun rebuilding a military base in the south of Ayn al-Arab, or Kobani, which was previously evacuated during Turkey's anti-terror operation in northern Syria.

A local council was established on Oct. 27 in Syria's northern town of Tal Abyad, which Turkey recently cleared of YPG/PKK terrorists with its Operation Peace Spring.

YPG/PKK terrorist ringleader Ferhat Abdi Şahin, codenamed Mazloum Kobani, is wanted by Interpol with a red notice, and the U.S. should hand him over to Ankara, Turkey's president said on Oct. 24.