Panathinaikos tried to match Real Madrid in Spain on Monday but its host was a class apart and won easily 96-78 in the end, at a game played four days earlier for the Euroleague's 26th round.

Greece's representatives in the Euroleague put two over Russia's on Greek soil, as depleted Olympiakos stunned CSKA once again and Panathinaikos saw off Zenit.

Olympiakos should be officially considered the European champion's jinx team, as CSKA Moscow lost another game to its perennial nemesis, with a 72-59 score on Thursday at the Peace and Friendship Stadium.

Turkey's Anadolu Efes will face Zalgiris Kaunas from Lithuania in a EuroLeague basketball game on Feb. 6

The Istanbul game will be held at Sinan Erdem Dome at 17:30GMT.

Anadolu Efes will seek to crown their winning series with victory over Zalgiris Kaunas as they won the last eight games in the Turkish Airlines-sponsored league.

Turkey's Anadolu Efes Istanbul will seek to maintain their top spot as they face second-placed CSKA Moscow in a Turkish Airlines EuroLeague game on Feb. 4.

The Round 23 match will kick off at the Megasport Arena in Moscow at 1700GMT.

In an away match in Berlin, Fenerbahçe's French guard Leo Westermann changed the fate of the game to help his team beat the German club.

Anadolu Efes defeated LDLC ASVEL Villeurbanne 101-74 at home to secure their lead in the Turkish Airlines EuroLeague on Jan. 17. 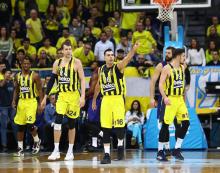 The match will be held at Ülker Arena in Istanbul at 20.45 local time in Turkey.