Today, the legal service of the European Parliament filed an appeal with the Court of Justice at the request of President David Sassoli, said the spokesperson of the EU Parliament.

The decision was made because it did not suspend the disciplinary Chamber of the Supreme Court.
The decision of the European Court of Justice followed after the European Commission requested "financial penalties" in order to ensure respect for the verdict from July, reports the AP agency.

The heightened tension between Brussels and Warsaw followed the Polish Constitutional Tribunal's ruling on October 7 that key articles of EU Treaties were incompatible with the Polish constitution.

Of late, the Commission has adopted a much tougher approach, with the EU executive slowing down the process of disbursing cash from the bloc's 750-billion-euro coronavirus recovery fund to Europe's two most recalcitrant members.

The main culprits for this migraine, which has no cure, are Poland and Hungary, but the problem is much deeper, writes Sputnik. 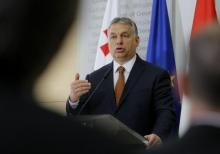 Hungary is required to withdraw the law, assessed as discriminatory towards the LGBT community, which will enter into force in that country tomorrow.
"If Hungary does not rectify such a situation, the EC will use the powers given to it as the guardian of the agreement," Ursula von der Leyen told the European Parliament.

The Constitutional Court of Romania (CCR) rejected today several constitutional challenges to Law No. 304/2004 on judicial organization and also unanimously quashed challenges to several articles in OUG No. 90/2018 on specific measures for rendering operational the Section for the Investigation of Judicial Crimes (SIIJ).

Several requests regarding the intervention of the Romanian government in 12 actions for annulment of some provisions in Mobility Package I brought by Bulgaria, Cyprus, Lithuania, Malta, Poland and Hungary have been submitted to the Registry of the Court of Justice of the European Union (CJEU).

Ljubljana – Responding to the EU Court of Justice ordering Slovenia pay a fine for failing to transpose changes to the EU directive on markets in financial instruments in due time, the Finance Ministry said the delay had not affected private and public interests. It added that the European Commission had been informed about the transposition.