President Klaus Iohannis on Tuesday said that the European project is a successful one, with the Union being "strong" economically, but the EU's "voice" is a "small" one at a global level, which for him, as head of state, is "totally unsatisfactory." The head of state said at the official launch of the national debate on the future of Europe, held at the Cotroceni Palace, that the member states

President Klaus Iohannis said on Tuesday that the European Union of the future is, in Romania's vision, a project that is inseparable from the idea of unity and solidarity, and for a "more integrated" union there is need for consolidating the Eurozone and the Schengen area.

More than 59% of the respondents to an INSCOP poll would vote for a nationalist party that promotes religious values and supports the traditional family, however, about two-thirds would not support such a party if it promoted Romania's withdrawal from the European Union, the rapprochement with Russia or the restriction of the national minorities' rights.

The decline in media freedom in the Balkans is eroding the European values of democracy and rule of law and creating a climate ripe for disinformation that is cultivating anti-EU and anti-Western sentiment across the region, writes Peter Horrocks.

Demonstrators calling for an end of Covid-19 lockdowns and the reopening of shops and restaurants clashed with police outside the Lower House of parliament in Rome on Tuesday, ANSA reported.

Brussels – Slovenians’ positive attitude towards the EU remains above the EU average in a survey presented by the European Parliament on Friday. The share of respondents in all members with a positive opinion about the bloc has increased by 10 percentage points to 50%, while in Slovenia the figure was at 58% in autumn, when the survey was conducted. 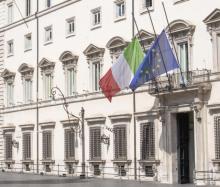 More than 70 percent of Italians estimate that a coronavirus crisis will cause the European Union crack-up, the research has shown.

AGERPRES special correspondent Oana Ghita reports: Banners reading "Lead with facts, not leave with lies", "Let's make Brexit!", UK and EU flags - some stylized with lights instead of stars - were some of the props a group of several dozen gathered on Thursday evening near the British Parliament used to add some drama to their campaign.

By a close majority in the referendum, on 23 June 2016, the UK's citizens decided to sever their 47-year relationship with the European Union.
The UK's exit from the European Union began on March 29, 2017 when then Prime Minister Teresa May launched Article 50 of the Treaty of Lisbon.