Euroscepticism in the United Kingdom 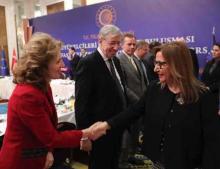 Turkish Trade Minister Ruhsar Pekcan has told the ambassadors of EU countries in Ankara that Turkey is waiting for the European Commission to renew the 1996 customs union agreement.

"Your contributions in this sense are exceptionally important. We invite you to work with the business world," she said at a meeting with the EU Delegation to Turkey on Feb. 26.

Let it be recorded that until the Brexit referendum in 2016, relations between the people of Britain and other citizens of the European Union appeared excellent. Although it was to be expected that the choice between "Leave" and "Remain" would provoke a rift among Britons, many of us did not expect the referendum to poison relations between the people of Britain and the rest of Europe.

Alternate Foreign Minister Miltiadis Varvitsiotis, who is responsible for European affairs, on Tuesday expressed Greece's dissatisfaction over the the bloc's long-term budget for the next seven years, also known as the Multiannual Financial Framework 2021-2027, as EU funds for cohesion policy and common agricultural policy remain at low levels.

It is critical for Turkey and the United Kingdom to sign a trade deal by the end of this year in order to avoid any negative implication on the two countries' trade volume after Brexit, said Osman Okyay, the chairman of the Turkey-U.K. Business Council.

MEP Vincze Lorant has been appointed as permanent rapporteur by the Committee on Civil Liberties, Justice and Home Affairs (LIBE) of the European Parliament for the negotiations on the new EU-UK collaboration framework.

British Prime Minister Boris Johnson will make changes to the government tomorrow, according to his office, cited by the France Press. These will be the first ministerial shifts in the UK since Brexit.

It is reported that Johnson wants to focus on domestic politics and reduce the number of ministers.

The Ankara Agreement and Customs Union with Turkey will continue during the Brexit transition period of 2020, and the two countries will work to sign a bilateral free trade agreement to be put into effect as of Jan. 1, 2021, British Ambassador to Ankara Sir Dominick Chilcott said on Feb. 7.

Already in December 2016, I noted, the Brexit referendum and the election of Donald Trump as US president signified the end of Euro-Atlantic project as it had existed in the Western Balkans. The subsequent three years have borne out the truth of this assessment.

There are Romanians who have come to the United Kingdom because they found the prospects for a decent life there. Others have chosen British citizenship for cultural reasons - the love of Shakespeare. Some admit that if things do not go according to plan, they can always return home to Romania, and others know very clearly that the United Kingdom is their home for now.

The United Kingdom finally cast off from the European Union on Jan. 31 for an uncertain Brexit future, turning its back after 47 years on the post-World War Two project that sought to build the ruined nations of Europe into a global power.