A total of five YPG/PKK terrorists have surrendered to security forces in southeastern Turkey, authorities have said.

Three YPG/PKK terrorists, fleeing from northern Syria, turned themselves in at border posts in Şanlıurfa's Suruç and Mardin's Nusaybin districts, the defense ministry said on Feb. 18 in a tweet.

A member of the YPG/PKK terrorist group surrendered to Turkish security forces in the country's southeast, state-run Anadolu Agency reported on Feb. 18.

Terrorists fleeing the terror group's shelters in northern Iraq and Syria turned themselves in at border posts in Şanlıurfa province's Suruç district and Sirnak's Silop district, the ministry said in a statement.

14 people, most of them Israeli soldiers, were injured in a car bomb attack in Jerusalem, the French press reported, citing Israeli authorities. The attack was carried out in a lively area with many bars and restaurants.

Greece described the day when the UK will officially leave the European Union as a "moment of sadness" and the beginning of a new relationship with the country in a statement issued Friday.

In a press statement regarding the withdrawal of the United Kingdom from the EU, President Klaus Iohannis says that Romania expresses hope that the UK will remain a close partner and a reliable ally, pointing out that the Romanian nationals in the UK will be able to enjoy their acquired rights without hindrance even after Brexit.

He was arrested in a joint operation by the provincial police forces and the Turkish Intelligence Organization (MİT) in the southeastern border province of Şırnak as he attempted to cross to Turkey. 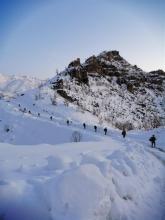 On Twitter, the ministry said terrorists were "neutralized" in an air-backed operation by Turkish Armed Forces in Hakurk region.