The head of the Amis du Palais de Tokyo (Friends of Tokyo Palace) Bernard Chenebault has been fired for calling for the assassination of Swedish climate activist Greta Thunberg, TASS reported.

According to Saturday's newspaper, Chenebault made a comment on Facebook regarding the emotional speech of 16-year-old Greta Thunberg at the UN General Assembly session:

Several US social networks, including Facebook and Whatsapp, will be required to transmit user-encrypted messages to British police in accordance with a new agreement between London and Washington.

The US Department of Justice plans to launch its own antitrust investigation against the Facebook company, Bloomberg news agency reported, citing own sources.

Facebook won't check the credibility of politicians' posts, the social network announced a year before the US presidential election.

The social network relies on third parties, including major news outlets, to verify the information.

Facebook has announced that it has bought New York-based startup CTRL-labs, which is exploring ways for people to communicate with computers using brain signals, Reuters reported.

The CNB estimates the deal at $ 1 billion, citing a well-informed source. 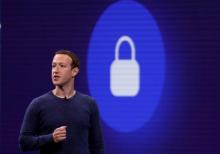 Facebook chief executive Mark Zuckerberg had a "good, constructive meeting" with US President Donald Trump at the White House yesterday, the company quoted by the DPA.

A Facebook spokesman said in an email that Zuckerberg is in Washington for meetings with politicians discussing future regulations on the Internet.

Facebook has announced the creation of a Supervisory Board that will decide how to manage the social network. The company said the panel will look into its first case in 2020.

The server of the company is left without a password.