Defending champions Trabzonspor will take on newcomer Istanbulspor in an away game on Aug. 5 in the opening game of the new Süper Lig season.

Trabzonspor won its first league title in almost 30 years in May and the Black Sea side's supporters were happy to see their team adding the Turkish Super Cup to its museum last week.

Fenerbahçe Beko, known as the "Yellow Canaries," has gained its 10th championship in Turkey's ING Basketball Super League after beating its rival, Anadolu Efes, 3-1 in the final series in Istanbul.

The northwestern province of Edirne applied to host 2024-25 European Junior Rowing Championships, the officials have said in the opening ceremony of the 2nd Edirne Rowing Festival held on the Meriç River.

Prominent Turkish sports club Fenerbahçe's German football player Mergim Berisha has been given a restraining order by a court in Istanbul over his fiancée's violence complaint. 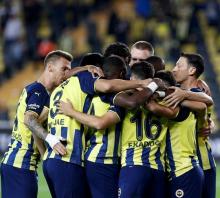 Turkey's most populous city, Istanbul, will host a meet of the country's main rivals, Fenerbahçe and Galatasaray, on April 10, with international scouts and football agents attending the "derby of the derbies" to keep eyes on the young talents of both teams.

Turkish women's football league has witnessed the first incident of "violence in sports" in history, with players of the Süper Lig team Amedspor attacking the Fenerbahçe footballers at the end of a match in the southeastern province of Diyarbakır.

Fenerbahçe won the match 2-1 with the last-minute penalty goal on April 2.

Girls living in orphanages in the Central Anatolian province of Sivas have formed a football team and qualified for the Third Women's Football League that will start in February.

The women's football teams of Turkish giants Galatasaray and Fenerbahçe have faced each other for the first time in history within the scope of the United Nations' "Orange the World" campaign to protest femicides and violence against women in Istanbul late on Dec. 7.

The two teams are now quite far from the top of the league, so both need a victory to grip the title race in the Turkish Spor Toto Süper Lig.

The first three half goals have helped Fenerbahçe secure an easy 3-0 win against Antwerp in the fourth match of the UEFA Europa League as the Yellow Canaries' captain targeted the president of the Greek team Olympiacos.
The Istanbul giant will meet next on Nov. 25.