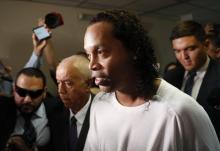 Soccer star Ronaldinho was arrested on March 6 night in a hotel in Paraguay's capital after authorities said he entered the country with falsified documents.

The 39-year-old Brazilian and his brother, Roberto Assis, were taken to a police station in Asunción shortly before 10 p.m. local time, Paraguay's prosecutors office said in a statement.

Real Madrid defeated Turkish giants Galatasaray 1-0 in Group A match at Türk Telekom Stadium in UEFA Champions League on Oct. 23.
Belgian star Hazard shone and it was a clever cut-back from him that provided Kroos with a shot on goal, and his snap-shot was deflected past goalkeeper Fernando Muslera in the 18th minute.

Former Chelsea superstar Eden Hazard is finding out that the grass isn't always greener on the other side following his blockbuster move to Real Madrid in the summer. 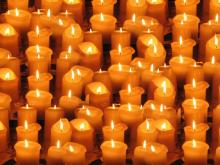 A major fire at a Muslim spiritual school near the capital of Liberia has killed 28 people - 26 children and two teachers, the Liberia president's office reported, quoted by BTA.

According to Presidential Press Secretary Isaac Solo Kelgbeh, the children killed were between 10 and 20 years of age, and there were only two adults - teachers of the children - among those killed.

The reason for the arrest is the investigation into corruption in Qatar at the World Cup in 2022.

He is said to have been taken to the premises of the Anti-Corruption Office of the Judicial Police (OCLCIFF).

Gica Hagi's academy for young, talented players has proved an absolute game-changer for a football scene that has gone from one crisis to another since the Communist regime fell and private investors moved in.

Diego Maradona greeted a new film about his life with scorn on May 20, telling people not to see it when it is released next month. 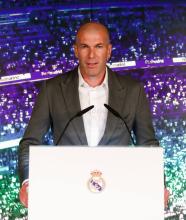 Real Madrid's leadership at a special general meeting today officially appointed Zinedine Zidane as a coach, replacing Santiago Solari. The contract of the legendary Frenchman is until June 2022.

Real Madrid won the 2018 Champions League final to register their third consecutive title. They are struggling in the league right now, but they could improve under their newly appointed head-coach Santiago Solari.

Below we have listed three Champions League finals which are considered as one of the best finals in the history of the elite competition.

A week after releasing his biography on the market, Hristo Stoichkov shared what motivated him to create the book, and what readers could find in it.