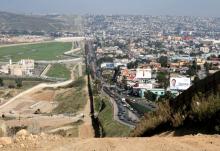 The Republican governors of three southwestern border states on Monday committed 1,600 National Guard members to the U.S.-Mexico border, giving President Donald Trump many of the troops he requested to fight what he's called a crisis of migrant crossings and crime.

Asserting the situation had reached "a point of crisis," President Donald Trump signed a proclamation on April 4 directing the deployment of the National Guard to the U.S.-Mexico border to fight illegal immigration and drug smuggling.

US President Donald Trump hosted the Greek Independence Day celebration at the White House on Thursday.

"We renew our commitment to the values and principles that make us who we are," Trump said during his remarks. "We stand together for freedom and justice and democracy today and for all time," he said.

The head of the most influential U.S. business lobbying group warned the Trump administration that unilateral tariffs on Chinese goods could lead to a destructive trade war that will hurt American consumers and U.S. economic growth.

US President Donald Trump citing policy differences fired Secretary of State Rex Tillerson and replaced him with CIA Director Mike Pompeo - a move which drew applause and criticism from lawmakers and rights groups.

For the CIA senior position, Trump nominated Gina Haspel, who is Deputy Director of the Intelligence Service. In fact, the news was reported by the president himself on Twitter.

Gary Cohn, the top economic adviser to U.S. President Donald Trump and a voice for Wall Street in the White House, said on March 6 he would resign, a move that came after he lost a fight over Trump’s plans for hefty steel and aluminum import tariffs.

U.S. President Donald Trump praised Chinese President Xi Jinping on March 3 after the ruling Communist party announced it was eliminating the two-term limit for the presidency, paving the way for Xi to serve indefinitely, according to audio aired by CNN.

Secretary of State Rex Tillerson said he hopes to visit the new U.S. embassy in London next week, shortly after President Donald Trump refused to attend its opening ceremony.

Chinese president Xi Jinping told his U.S. counterpart Donald Trump that there have been “positive changes” on the Korean peninsula, state media said Jan. 16 following a phone call between the two leaders.