When a successor tries to prove that he is different from his predecessor, then he takes an extra administrative burden - the burden of proving himself/herself right.

More than 190 Democratic lawmakers sued President Donald Trump in federal court on yesterday, saying he had accepted funds from foreign governments through his businesses without congressional consent in violation of the U.S. Constitution.

This could mean a boost in the number of U.S. forces in Afghanistan, where 16 years of fighting against the Taliban and other militants has resulted in a stalemate.

Calls are growing for President Trump to “clean house” at 1600 Pennsylvania Avenue, after a series of leaks aimed at embarrassing and undermining the president sprung from the White House this week.

The White House was warned in January that Donald Trump's national security advisor Michael Flynn was vulnerable to Russian blackmail, a top former official told lawmakers May 8, as the issue of the president's ties to Moscow returned to the spotlight. 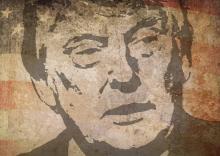 The United States and China struck what appeared to be an unusual bargain on April 12 as U.S. President Donald Trump said he would not label China a currency manipulator and voiced confidence Chinese President Xi Jinping will help him deal with North Korea's mounting threat.

We appear to have returned to the usual state of tension between Washington and Moscow, following a period when we could not be sure of how relations would develop given US President Donald Trump's unclear declarations both during his election campaign and after he won.

Chinese President Xi Jinping urged cooperation with the United States on trade and investment on April 6, inviting U.S. President Donald Trump to visit China in a cordial start to their first meeting likely to broach sensitive security and commercial issues.