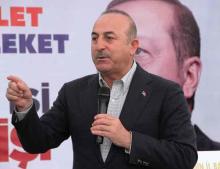 Turkey is about to start offshore drilling with two vessels around the island of Cyprus, Turkish foreign minister said on Feb. 21.

A court within the British military bases in Cyprus has sentenced a Palestinian man to six months in prison after finding him guilty of trying to illegally bring two men into a base from the island's Turkish Cypriot breakaway north.

A bases statement said Thursday that Mohammed Aljaro was arrested as he tried to drive through a checkpoint last month.

In the pages of this newspaper, analyst after analyst - myself included - has celebrated a high point in the Greece-US relationship. Most peg the beginning of this high point to 2015 and the Obama administration's efforts to avoid a messy Grexit.

The Prespes accord sets an example for problem solving in Europe and beyond, French President Emmanuel Macron has said in reference to the name dispute reached between Greece and Former Yugoslav Republic of Macedonia (FYROM).

Macron made the comments at the end of the fifth Southern EU Countries Summit in Nicosia.

There can be no settlement of the Cyprus problem that does not recognize Turkey's military intervention rights and security guarantees, Turkish Foreign Minister Mevlut Cavusoglu was quoted as saying Tuesday.

Over 40 years of U.N.-led federal partnership negotiations to resolve the Cyprus issue have failed to yield a result and there is no sign that this will change in the foreseeable future.

Turkish Foreign Minister Mevlut Cavosuglu says it is time to consider alternative solutions to the Cyprus issue beyond the bi-zonal, by-communal federation.

In an interview to Cyprus's Politis newspaper, Cavusoglu expresses Turkey's readiness to discuss other solutions, such as a confederation or two separate states.

Turkish Cypriot leader Mustafa Akinci reportedly threatened to resign rather than table any proposal for a solution to the Cyprus issue other than a federal system, Turkish Cypriot media reported on Wednesday.

According to daily Kibris Postasi, cited by Cyprus Mail Online, Akinci made the statement during the visit of Turkish Foreign Minister Mevlut Cavusoglu to the north last April.

UK Foreign Secretary Jeremy Hunt has said that the Cyprus issue is "not insoluble" and that a federal solution would be better for all Cypriots than the "unacceptable" status quo.