Turkey's defense minister Hulusi Akar has presented maps to the Libyan government in a bid to indicate that Greece is trying to encroach upon Libya's continental shelf, according to reports in Turkey's Yeni Safak newspaper.

In its reports, the newspaper accuses Greece of "stealing Libya's EEZ," referring to the country's exclusive economic zone. 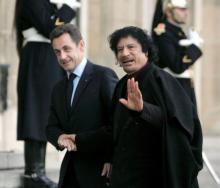 Nicolas Sarkozy's interrogation was renewed today as part of an investigation into suspicions about financing his presidential campaign in 2007 from Libya during Muammar Gaddafi's reign, the France press and Reuters reported.

Some €10 billion of Libyan government funds, frozen as part of sanctions against the late Muammar Gaddafi's inner circle, has mysteriously disappeared from a Belgian bank somewhere between 2013 and 2017, according to local media.

The son of the Libyan leader killed in October 2011, Muammar Gaddafi, intends to run for president in the election, which will probably be in mid-2018, Egyptian daily newspaper reported.

Libyan Coast Guard said today that it has encountered two inflatable boats with 299 African migrants, including 40 women and 19 children, in the Mediterranean east of Tripoli, an Israeli press reported.

Seif al-Islam, the son and one-time heir apparent of late Libyan dictator Moamar Gadhafi, has been released after more than five years in detention.

Turkey delivered 22 tons of medicine and medical supplies to Libya on May 24, the Turkish Foreign Ministry has said.

Africans trying to reach Europe are being sold by their captors in “slave markets” in Libya, the International Organization for Migration (IOM) says.
Victims told IOM that after being detained by people smugglers or militia groups, they were taken to town squares or car parks to be sold.

The Turkish Government, in an unprecedented decree, announced the transfer of its most valuable financial and real assets into a wealth fund on Jan. 5. For any ordinary Turkish citizen, the "transfer of assets into a fund" sounds a bit shady.