The incident occurred in Thailand on December 7

Turkish border guards on Dec. 14 took into custody a suspected French-origin terrorist trying to cross into the country from its southern border with Syria, officials said.

The suspect, sought with a red notice and identified only by the initials C.G., tried to enter the country's southern Hatay province with a fake name, said Turkey's National Defense Ministry in a statement.

The United States on Monday imposed sanctions on Turkey over its purchase of Russian ground-to-air defenses and targeted the top Turkish defense development body, its president and three employees.

Turkey has arrested 13 people involved in the abduction and smuggling to Iran of an Iranian dissident wanted by Tehran in connection with a deadly 2018 attack in southwestern Iran, Anadolu Agency reported on Dec. 14.

The Turkish Culture and Tourism Ministry on Dec. 13 brought back a historical statue of Kybele, pre-historic goddess of fertility, which was smuggled to Israel in 1960s and sold there.

The statue was finally returned after hard work of Turkish authorities after they proved its origins and halted audition process in the U.S.

The European Summit postponed substantive decisions that Greece expected regarding Turkey for March, opting instead for limited sanctions on Turkish individuals over Ankara's transgressions in the Eastern Mediterranean, against Cyprus in particular.

The EU leaders should comprehend the strategic importance of the bloc's relations with Turkey and should not allow any initiative that would hinder ties, Turkey's presidential spokesman said on Dec. 11.

The EU missed an opportunity of cooperation in the region by ignoring the rights of Turkish Cypriots and Turkey, said the presidency of the Turkish Republic of Northern Cyprus (TRNC). 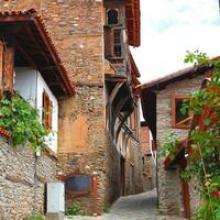 Turkey's Aegean provinces and their cozy villages rich in cultural and natural heritages offer a perfect getaway for those who want an isolated holiday during the pandemic.

EU leaders have sent a strict warning to Turkey over its drilling activities in the Eastern Mediterranean, Greek Prime Minister Kyriakos Mitsotakis said Friday, adding that the country is certain to face sanctions unless it gives up its "provocative behavior."