The Council of Ministers has defined the border points on Bulgarian territory through which unobstructed passage of commodities will be ensured. The plan for securing "green corridors" along the European road network has been proposed by the Minister for Transport, Information Technology and Communications. It complies with the guidelines of the European Commission of 16 March 2020. 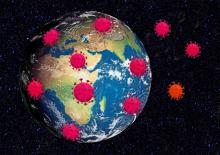 Two more of the patients have been cured, General Mutafchiiski said.

Six are Bulgarians who have already died because of COVID-19. The number of infected has reached 331. This was reported by Gen. Ventsislav Mutafciiski at a briefing at the Council of Ministers on Saturday afternoon.

The new cases of people infected with the new coronavirus in Bulgaria are 32, as the total number of cases in the country has reached 174, the head of the National Crisis Staff announced. 28 are the new cases registered in Sofia. Young people also become infected, but they usually develop only light symptoms compared to older people.

A Bulgarian was arrested while trying to transport 10 kg of heroin across the country's border, the District Prosecutor's Office in Burgas announced.

The drug trafficker was detained at the Malko Turnovo border checkpoint on March 13th. The drug, distributed in 22 packages, was stashed in a car with which the man traveled from Turkey to Bulgaria.

In 72 hours, The Sofia second city hospital can be transformed into an infectious diseases hospital because of the coronavirus. he measure will be taken following an order from the Ministry of Health. Patients who are currently there will be relocated to other hospitals as needed.

Today is the Feast of Saints Forty Martyrs. They were a group of soldiers in a Roman garrison in the city of Sebaste in Lesser Armenia, who after brutal torture died as martyrs for their Christian faith during the time of the persecutions of Licinius, in the 4th century BNR reported.

Sofia International Film Festival is the biggest film festival in Bulgaria. It began in 1997 and attracts more than 85 000 spectators annually. The festival aims to present the best of the contemporary cinema to local audiences and regional Bulgarian and Balkan cinema to international audiences, as well as to encourage cooperation between local and international filmmakers.

More than 30 people in the district of Rousse, Northern Bulgaria, are monitored because of suspicions for coronavirus. They have returned from the so called risky countries, which have confirmed cases of coronavirus, BNT reported.

Ogynyan Nenchev has spent the last 15 years trying to escape Vidin, a province in the north-western tip of Bulgaria. Six times he went in search of a better life, six times he came back. His decision to keep returning to the poorest corner of the poorest country of the European Union was unusual. His desire to leave was not.