Hussam al-Aqouli remembers the exact spot along southern Iraq's Lake Sawa where his two daughters once dipped their feet into clear waters. Now he stands there two years on and the barren earth cracks beneath him.

Iraq unveiled three monumental sculptures in the ancient city of Hatra on Feb. 24, newly restored after being vandalized by militants of the Islamic State group during their brief but brutal rule.

From the rubble of Iraq's war-ravaged city of Mosul arises the sight of androids gliding back and forth in a restaurant to serve their amused clientele.

"Welcome", "We wish you a good time in our restaurant", "We would be happy to have your opinion on the quality of the service", chime the automated attendants, red eyes blinking out of their shiny blue and white exteriors.

"We commemorate with respect our martyr Osman Köse, official of the Consulate General in Erbil, assassinated in a heinous attack by the terrorist organization PKK on July 17, 2019," the Foreign Ministry wrote on Twitter.

The Ezidi community, which escaped from Iraq's Sinjar district and took refuge in Duhok province after ISIL took control of the region, is unable to return to their homes because of oppression by the PKK and the terror group's extensions in the region, Turkey's consul general in Erbil said on April 1.

The Turkish Foreign Ministry on March 10 reacted to a stamp planned to be issued by the Iraqi Kurdish Regional Government (KRG) on the occasion of the visit of the spiritual leader of the Catholics, Pope Francis, to Iraq. 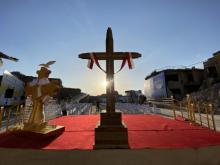 Pope Francis has visited parts of northern Iraq that were held by Islamic State (IS) militants on the third day of his historic trip to the country.

Christians were among those targeted by IS when they seized the region in 2014, carrying out human rights abuses.

The Pope prayed among ruined churches in Mosul, the former IS stronghold, before meeting Christians in Qaraqosh.

Turkey's Foreign Ministry issued a travel advisory on Jan. 3, asking its citizens to delay trips to Iraq amid the strained tension in the country.

German and Kurdish archaeologists have found a 3400-year-old palace in northern Iraq thanks to prolonged drought, DPA reported.

The building of a minimum of 2000 sq. M is made of brick walls up to 2 m high and is located in a reservoir in Iraqi Kurdistan. The palace was part of the ancient and mysterious Mittani Empire, experts from the University of Tübingen, Germany announced.

A 3,000-year-old carved stone tablet from Babylonia, which promises a curse on those who would destroy it, is to be flown home from Britain after being looted during the Iraq War.