Greek distributor StraDa Films is launching its online cinema service with "The Whaler Boy," a coming-of-age drama directed by Philipp Yuryev, in what is the 30-year-old's first feature. Selected in competition at Venice's 17th Giornate degli Autori (Venice Days), it is a moving tale of a teenage Inuit's perilous quest for love across the Bering Strait.

The Colosseum in Rome opens to tourists at the end of May. One of the largest landmarks in the world will be accessible to visitors under strict security measures that are currently being prepared.

The Marghera Industrial Port in Venice's lagoon was evacuated as a 225 kg World War II-era bomb was defused and set to be exploded in the sea., the French press and DPA reported.

Some 3500 people living in the area were also evacuated.

The movement of ships, trains and buses was temporarily halted, and Venice International Airport stopped all flights for several hours.

As floodwaters in Saint Mark's Square are no longer a novelty, and knowing that, in any case, Venice has a problem as it was built in a lagoon, most of us probably did not understand the severity of the danger posed by this week's flooding of the city that once reigned over much of the Eastern Mediterranean. 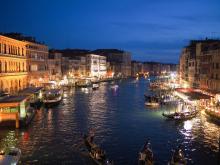 Water levels are expected to rise to 150 centimeters in Venice today - a new peak at a critical level of 130 centimeters, TASS reported, citing authorities in the Italian city.

Water levels in Venice rose to 183 centimeters and more than 80% of the city is flooded, TASS reported, citing ANSA. City officials are ready to declare a state of emergency.

San Marco Square is flooded - the water there is over 1 meter. The famous Basilica was also flooded.

A 4.4 magnitude earthquake was registered at 06:31 on Friday in the Tyrrhenian Sea off the southern coast of Italy, the country's National Institute of Geophysics and Volcanology announced. 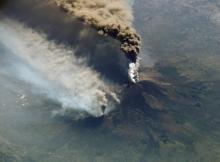 A new eruption of the Etna volcano, accompanied by increased seismic activity, has been detected by specialists of the National Institute of Geophysics and Volcanology of Italy.

Among the participants could be seen suits of superheroes or cartoon characters, but also traditional Venetian costumes.

The carnival in the Italian city is also known for the special masks that the participants bring. It was first held in the 11th century in the period before the 40-day fast for Easter.

The Italian Educational Institute presents a series of watercolors by Greek artist Pavlos Habidis, which he painted on commission in the spring of 2015 for a book dedicated to Sicily's Valley of the Temples, a UNESCO World Heritage Site.