The National Institute of Hydrology and Water Management (INHGA) on Wednesday extended a Code Red alert of floods for rivers of seven counties till Friday afternoon.

Chairman of the ruling Social Democratic Party (PSD), Prime Minister Victor Ponta, said on Tuesday at the party's National Council meeting in Craiova that on December 22 this year the Romanians will regain their freedom, stressing that Traian Basescu's end will come in 100 days.

Gilort, Lotru and Oltet Rivers, running through three counties of the southern Oltenia region, are under a Code Red warning for flooding, issued by the National Institute for Hydrology and Water Management (INHGA) on Tuesday, valid until 11:00 pm (Romania's time).

More than 300 teams from all over Europe, mostly British, stopped over at least for one night in Sibiu City, central Romania, a mandatory place on the map of the world's largest charity rally, the Mongol Rally, where Romania is represented by two teams - Dracula Khan and Mamaliga (Polenta) Warriors, says Vlad Grigore, one of the Romanians that took part in the rally in 2013.

President Traian Basescu in Sinaia, on Saturday, said that the aviation accident of Ukraine, in which 298 people died, cannot be left without an international investigation and without consequences for those responsible for this tragedy.

Former Mayor of Cluj-Napoca municipality (center-western Romania), Sorin Apostu was irrevocably sentenced on Monday by the High Court of Cassation and Justice to four years and six months imprisonment for bribe taking, money laundering, forgery in deeds by private signature.

Cyclist Anton Duma has set off on Sunday from Bacau in a tour of Romania that will encompass 5,000 km in order to raise funds for aiding 28 teenage girls that are presently in the care of the Betania Association of Bacau through their program titled "Youth Integration Center".

Hundreds of curious bystanders have marveled since Monday, when, for the first time, in the pedestrian area of the historical city center of Sibiu, a smiling "mystic" appeared, levitating a meter above the ground with the help of a staff surrounded by an aura of mystery and most importantly, an air of calm that amazed any viewer. 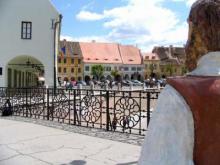 The City of Sibiu (central Romania) was declared the best tourist destination of the year in Romania at the Excellence Awards Gala organized on Thursday evening by Hotel Tourism Leisure Investment Conference, according to a press release remitted on Friday to AGERPRES by the Sibiu Town Hall.