Franjo Baricevic was born in 1953 in the small village of Hrtkovci, near the town of Ruma in Serbia's northern Vojvodina region, where his family had lived for several generations.

Vucic stated that there is no need for him to be at the head of the SNS anymore, because they have been tired of him in the previous 10 years.
He also referred to the Law on Expropriation.

Several main streets in the city were blocked and without traffic, from Kneza Miloa, across Savska, to certain streets around them.
Large police forces are noticeable in all parts of the city.
The roadblock was organized despite the appeal of the Ministry of the Interior that blocking the roads is a violation of the law.

A11, an NGO dealing with violations of workers' rights, said that private security men arrived at the construction site for a factory for Chinese tyre manufacturer Shandong Linglong Tire in the city of Zrenjanin on Tuesday and began blocking access to Vietnamese workers who have been the focus of exploitation allegations this week.

A BIRN investigation has identified serious delays on all three sections of the line, as well as mistakes that have cost Serbia almost $35 million in penalties; it also turned up documents showing that almost $720,000 of an $800 million Russian loan for the railway line was spent on the lease of six cars from a Russian contractor.

As reported by the reporter of TV Prva, who talked to the locals, the citizens heard gunfire that reminded of the firing from automatic weapons, the so-called Uzi.
During the attack, U. S. (26), who was the bodyguard of G. K., who was previously known to the police, was killed. 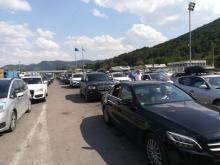 The longest delays are in Horgos border crossing to Hungary, where the convoy of passengers stretch three kilometers long.

In Western Europe, about 200 people lost their lives, entire villages and even cities were flooded. The damage is huge, and the Germans are now threatened by toxic sludge. What worried us in Serbia was the large amount of precipitation that fell on our country, but also the Danube, which "collects" all that water from Europe.

"Before the end of the year, we will start building the sewerage system on the left bank of the Danube," said Aleksandar Vui on that occasion, adding that the necessary documentation for that project is now being completed.
"It will be a big and most important project, but we found the money and we will start with it soon," said Vucic.