The United States has conveyed its "strong position" to the Greek government about an Iranian tanker that sailed for Greece on Monday after it was freed from detention off Gibraltar and Washington says is carrying oil to Syria, a State Department official said.

No "formal request" has been submitted so far to Greek authorities by the the Iranian tanker wanted by US authorities to dock at the port of Kalamata or any other port, Shipping Minister Yiannis Plakiotakis said on Tuesday.

An Iranian tanker sailed through the Mediterranean toward Greece on Monday after it was released from detention off Gibraltar, and Tehran said that any at US move to seize the vessel again would have "heavy consequences." 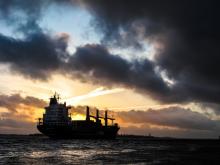 Gibraltar has rejected a request by the United States to retain the oil-filled Iranian tanker Grace 1. So the ship was released to sail. He raised the Iranian flag, changed his name, and left Gibraltar. On Thursday, a court on British territory ruled that the ship should be released after commandos seized it in early July, leading to an international scandal.

An Iranian supertanker with $130 million worth of light crude oil that the US suspects is tied to a sanctioned organization has left Gibraltar and is heading east into the Mediterranean Sea, with its next destination reported to be Greece. 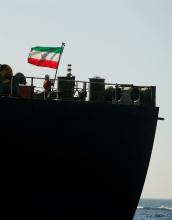 The Iranian tanker caught in a standoff between Tehran and the West left Gibraltar on Aug. 18 night, shipping data showed, hours after the British territory rejected a U.S. request to detain the vessel further.

An Iranian tanker caught in a stand-off between Tehran and the West has raised an Iranian flag and has had a new name painted on its side, Reuters images of the stationary vessel filmed off Gibraltar showed on Aug. 18.

Britain's Mediterranean territory Gibraltar decided on Aug. 15 to free a seized Iranian oil tanker, but did not immediately indicate when or if the ship would set sail after the United States launched a new, last-minute legal bid to hold it.

British Prime Minister Theresa May was headed back to Brussels on Saturday to defend the planned Brexit divorce deal even as Spain threatened to boycott an EU summit meant to endorse it, reported AFP.

He pointed out that he would do so if Spain's direct role in negotiating the future of Gibraltar is not recognized.