More than one tonne of cocaine was seized from a banana container at the port of Gioia Tauro in the southern Italian region of Calabria. This was announced by Italian carabinieri and the financial police, BTA reported.

The container was traveling from South America and had to reach Germany. The drug found in it, totaling 1.2 tonnes, could be sold for at least EUR 250 million. 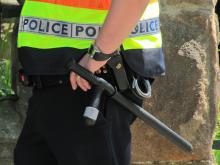 Italian police have seized 24m pills of the painkiller Tramadol that they suspect were destined for sale by Islamic State to its fighters in north Africa and the Middle East, reported the Guardian.