"Good evening, I'm Mateo": it is unusual for a former prime minister to introduce himself to you with his given name. But 46-year-old Matteo Renzi (in addition to the well-known Mediterranean relaxed demeanor) has this comfort of a person who managed to reach the top very young.

French President Emmanuel Macron and Italian Prime Minister Mario Draghi are coming out to fill the gap on the European throne at a time when the era of German Chancellor Angela Merkel is coming to an end, writes the Brussels portal Politico.

A judge in Sicily on Saturday ordered former interior minister Matteo Salvini to stand trial for having refused to let a Spanish migrant rescue ship dock in an Italian port in 2019, keeping the people at sea for days.

Judge Lorenzo Iannelli set September 15 as the trial date during a hearing in the Palermo bunker courtroom, the LaPresse news agency reported.

Italy's latest emergency decree, signed by premier Mario Draghi, extends most of the existing covid-19 restrictions and closes all schools in red zones or areas with high infection rates. 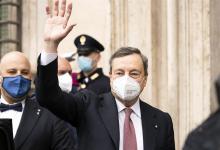 Mario Draghi, the man largely credited with saving the euro currency, took the helm as Italy's premier on Feb. 13 after assembling a government of economic experts and other technocrats along with career politicians from across the spectrum to guide the pandemic-devastated nation toward recovery.

Former European bank chief Mario Draghi agreed on Feb. 3 to try to form a non-political government to steer Italy through the coronavirus pandemic after last-ditch negotiations among political parties failed to produce a viable governing coalition.

Italian Prime Minister Giuseppe Conte has officially stepped down in order to try to form a government with wider support, and the consultations with the parties with a view to finding a new parliamentary majority will start on Wednesday afternoon, according to the official statement from the presidential palace.

Conte will try to form a coalition government

Italian Premier Giuseppe Conte resigned on Jan. 26 after a key coalition ally pulled his party's support over Conte's handling of the coronavirus pandemic, setting the stage for consultations this week to determine if he can form a third government.

Italian Premier Giuseppe Conte intends to offer his resignation on Jan. 26, his office said on Jan. 25, a move seen as gamble that the embattled leader will get a fresh mandate from the president to try to forge a more viable coalition.