That Kosovo needs a new national sports stadium was obvious even before 300,000 fans were left to vie online for just 13,000 tickets to this month's Euro 2020 qualifier in Pristina with England.

But plans to build a new one have been taken hostage by politics.

The Kosovo Prosecution told BIRN on Tuesday that the files found on the two Serbian citizens who were arrested last week for alleged espionage contained work-related documents about the head of the municipality of Kllokot/Klokot, including diplomas and contracts.

A giant Kosovo flag in the centre of Pristina in June. Photo: EPA/VALDRIN XHEMAJ

"On this specific case, the Gjilan/Gnjilane Prosecution's Department for Serious Crimes, yesterday, on July 10, 2019, detained two persons of Serb nationality on the suspicion that they have committed the criminal offence of espionage," said Liridona Xheladini from the Gjilan/Gnjilane prosecution.

It is not easy to keep secrets, especially about a matter of such national importance. It is rumoured that Thaci and Vucic plan to announce a deal to swap territories just prior to their next meeting in Paris on July 1.

According to a prominent Kosovo personality, these are the deal terms:

Serbia will agree to recognise Kosovo.

The complaint as been filed to the First Basic Public Prosecutor's Office in Belgrade.

Sabic reacted in this way because of suspicion that in the actions of one or more employees of the Ministry of Internal Affairs (MUP) contain elements of the criminal offense of unauthorized collection of personal data. 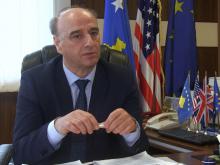 Jetish Maloku, the head of basic Prosecution in Gjilan/Gnjilan, told BIRN that five Serbs detained on Tuesday in raids at five different locations in the eastern town of Gjilan/Gnjilane, were released.

"They are free, we are investigating. We are analysing all the evidences that has been confiscated," he added. 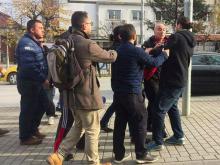 Kallxo.com journalist Taulant Osmani was threatened with physical attack and was verbally abused at a protest against the relocation of a Yugoslav-era monument in Gjilan.

Osmani was covering the protest, following his earlier reporting on the tense debate between Gjilan's residents, governance, and civil society regarding the monument's relocation.

Kosovo Police said they raided Serbian Red Cross centres on the authorisation of the courts on Wednesday night in Prizren, Pristina, Pejë/Pec, Gjilan/Gnjilane and Mitrovicë/Mitrovica.

"Seized documents are suspected to be related to a census, considered suspicious and in contradiction to the law, as a census should be conducted by Kosovo institutions," the police press release said. 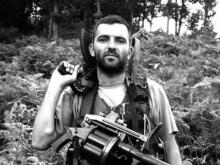 A court in the town of Gjilan/Gilanje acquitted Lirim Jakupi, who has been a member of ethnic Albanian guerrilla groups in Kosovo, Macedonia and Serbia, of attacking Macedonian police in 2014 and 2004.

Graffiti reading "Kill the Serb," and "UCK," along with a swastika and other offensive content have been painted on a fast food kiosk in Gnjilane.

According to the Silovo-based RTV Plus broadcaster, "these are the first anti-Serb graffiti to appear in the town in the past several years."