Concerns have been raised that Albania did not immediately ask Interpol to issue an international 'red notice' for the arrest of former General Prosecutor Adriatik Llalla immediately after he disappeared following the court verdict confirming his two-year prison sentence for illegally concealing assets.

The Socialist Party-controlled parliamentary administration offered MPs laptops for free on Thursday as it announced that parliamentary committee debates will now be held online, following a recommendation by the Committee of Experts, a body that advises the government on measures to contain the coronavirus pandemic.

Albania's opposition Democratic Party will end its boycott of parliament on Friday, but faces serious questions over how it will handle a decision by party leader Lulzim Basha to remove his predecessor and mentor, Sali Berisha, from its parliamentary caucus.

Their story, contained in court documents seen by BIRN, speaks to the well-placed connections that grease the wheels of Albanian drug trafficking, connections that in the case of Seferi and Ajdini stretched all the way to the security detail of the country's then interior minister.

The Special Prosecution said on Tuesday that the mayor of the western city of Lushnja, Fatos Tushe, a member of the ruling Socialist Party, has been arrested alongside five other senior officials on graft charges.

They are accused of abuse of office and "violating the equality of participants in public tenders or auctions", the prosecution said.

The International Monitoring Operation, created to oversee a vetting process in Albania launched under EU and US pressure in 2017, issued a decision saying Tirana chief prosecutor Elizabeta Imeraj "has significantly jeopardised public trust in the judicial system" and should be removed from the post. 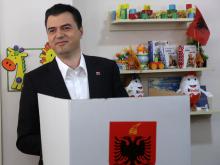 Less than two months after his party lost the general elections on 25 April for the third time to the Socialist Party, Lulzim Basha won internal leadership elections, confirming his grip on the party for the next four years.

Albanian MPs on Wednesday voted to oust the country's president, Ilir Meta, though the final decision on the issue must go to the Constitutional Court, which will conclude if Meta will be removed from office before his term ends in until 2022.

Some 104 lawmakers in the ruling Socialist-dominated chamber voted for dismissal while seven voted against. Three abstained.

With days to go before the key second round of local elections in Croatia, all eyes are turned to the capital, Zagreb, where leftist candidate Tomislav Tomasevic is poised to take the mayorship of the city. His main rival is popular singer and now right-wing politician Miroslav Skoro.

"With this designation, I am reaffirming the need for accountability and transparency in Albania's democratic institutions, government processes, and the actions of Albanian public officials," Secretary of State Antony Blinken wrote in the press release.