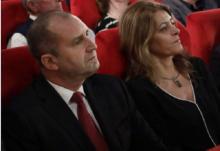 President Rumen Radev's wife, Desislava, will undergo surgery today because of the serious condition she is in after it became clear that she had three aneurysms in her brain, reported sources from the St.Ivan Rilski hospital, where the First Lady was admitted for treatment.

The plenary hall of the new parliament may well be empty again after May 13. This is the critical date by which we will have known whether there will be another election because of impossibility to form a government, writes Trud daily.

The decisions of the Central Election Commission (CEC) announcing the results of the vote, the allocation of seats in the 45th National Assembly and the names of elected MPs are published in today's 30th issue of the State Gazette.

GERB party will put forward a government despite the small chances that it will be supported, announced at a briefing at the party's headquarters, Deputy Prime Minister Tomislav Donchev shortly before 1 p.m. today.

He warned that attempts to bypass GERB in parliament would be a gross political mistake.

"My fellow politician Slavi Trifonov should not defect, but come to the fore and assume responsibility. He should not bug out, nor complain that they do not have people, but to form their own majority, Prime Minister Boyko Borisov urged.

Prime Minister Boyko Borisov exercised his right of vote in his hometown of Bankya at 78 secondary school Hristo Smirnenski.

He voted with a paper ballot.

From today we again will vaccinate 15,000-20,000 people a day and after another month of patience the most vulnerable groups will be immunised, according to Prime Minister Boyko Borissov, who at today's government meeting said that the pandemic is raging at full swing in Europe and the rest of the world.