The European Union's leader on Wednesday called on the 27-nation bloc to ban oil imports from Russia in a sixth package of sanctions targeting Moscow for its war in Ukraine.

Germany summoned Turkey's ambassador in Berlin on April 29 to protest a sentence of life in prison that a Turkish court handed to businessman Osman Kavala.

US President Joe Biden has asked Congress for $33 billion in support of Ukraine. NATO is determined to help Ukraine, even if the war lasts for years. Earlier, the Kremlin warned that arming Ukraine posed a risk to European security and promised a firm military response to attacks on Russian territory. 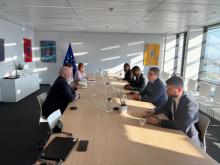 He visited the European Commission together with the Minister of Energy Alexander Nikolov. The visit was due to Gazprom's decision to suspend gas for Bulgaria.

"Gazprom's announcement that it will unilaterally cut off gas supplies to customers in Europe is another attempt by Russia to use gas as a tool for extortion," European Commission President Ursula von der Leyen said in a statement. According to her, Gazprom's decision is unjustified and unacceptable and once again shows Russia's unreliability as a gas supplier.

In Kyiv, they say that the Ukrainian army is moving to the NATO standard.
Russia's permanent mission to the United Nations announced yesterday that Ukraine has refused to sign the agreement on the safety of nuclear power plants, which was initiated by the International Atomic Energy Agency (IAEA).

German arms manufacturer Rheinmetall has offered to sell 88 second-hand Leopard battle tanks to Ukraine. The offer apparently includes training in Germany, spare parts and ammunition, according to documents obtained by the DPA.

There is a special discussion about Marder tanks.
However, Germany has found another scheme - it donates weapons to countries that arm Ukraine.

They accuse German Chancellor of being partially responsible for the Ukrainian defense, and they also threatened him with a vote of no confidence in the Bundestag, reports the DPA agency.