Iran will not talk to the United States until all sanctions imposed on Tehran are lifted, President Hassan Rouhani said on Aug. 27, a day after President Donald Trump said he would meet his Iranian counterpart to try to end a nuclear standoff.

Iran has unveiled its new domestically developed and manufactured air defense system. Earlier, Iranian officials called the Bavar-373 the first such system in the country.

Tehran started making Bavar, which means "I believe" after the purchase of the Russian C-300 system was halted in 2010 due to international sanctions.

Iran is not interested in negotiating with Washington, but if there is mediation, it should focus on the US returning to the 2015 nuclear deal, which they left last year. This was stated by Iranian Foreign Minister Mohammad Javad Zarif, quoted by BTA.

In the same time, he accused French President Emmanuel Macron of sending "mixed signals" to Tehran over possible talks.
"I know Emmanuel means well, as do all others, but nobody speaks for the United States but the United States itself," Trump said in a series of tweets. 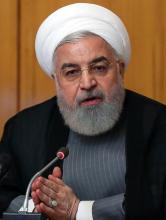 President Hassan Rouhani said Iran will exceed on July 7 the uranium enrichment limit it agreed in a 2015 deal with major powers, raising it "as much as necessary".

Turkey's foreign minister was received on June 21 by his Iranian counterpart in Isfahan, central Iran.

Iran will not wage war against any nation, Iran's President Hassan Rouhani said on TJune 18 in a speech broadcast live on state TV.

Iran's parliament speaker hinted on June 16 that Washington could be behind the "suspicious" tanker attacks in the Gulf of Oman to pile pressure on Tehran, official news agency IRNA reported.